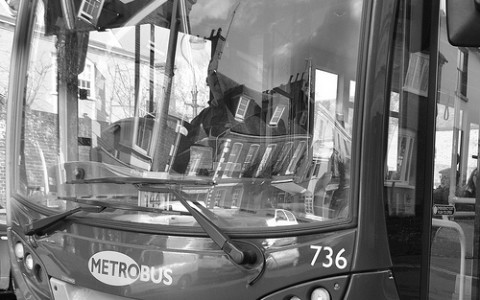 Not much traffic this late in the evening, and the bus surges forwards impatiently. Reflections, warmth, mind buzzing from the class. Breathe for a while, just sit here, let my mind go. Only a few of us, but enough to think about. A besotted couple staring into each others eyes, a young black girl engrossed in her iPhone,  a few old dears and a family with a young boy who is excited to be sitting up there in the front.

This is where we turn up to the station, round we go, she’s a bit off balance, nearly, – that was close – you could see that coming, too much texting – she should sit down it’s not as if we’re short of seats, dangerous texting is, gets taken out of context, too many interpretations, strange how so few words can go so wrong. Not like this evening, I thought that was all right really, not a bad group  – except I always seem to talk too much. Every time I promise myself I’ll keep quite, then before I know it I’m asking questions. Not like some of them they don’t say a word, don’t take any notes either. Just kind of sit there like lemons, not that lemons sit anywhere but I know what I mean.

Did I mean lemmings? No – definitely not.

Talking of jumping off cliffs it should be more of an adventure to throw yourself into  things you don’t normally do just to see what happens, how you will react. But it’s not that strange at all once you actually start, everything has its own props, it’s own gear – there’s Lycra for cycling, thoughtful expressions for creative writing, special shoes for Tango – dress up right, look the part, and then it’s just a matter of learning the rules. Real shame when I’m trying to push myself into the great unknown, as opposed to the slightly less familiar – it would be great to do something totally unpredictable, with no rules at all, but I know that isn’t me, not really. Woah she almost fell again, she really should stop that. Its not her I worry about, its that old lady under her elbow, blissfully unaware she is. Both almost deaf and not seeing clearly, for very different reasons. Opposite ends of a curve, same experience separated by decades, barely touching each other, a little intersection just for a moment, blissfully unaware of each other, it’s only me that notices.

Voice. It’s all about voice. Problem is I can’t find mine, not consistently, not like her. Really consistent that one, a hundred percent softness. Floods of emotions interrupted by little bits of writing. But me – I just seem to be all over the place. Great at night, there’s almost no cars at all, hence the violent turns and the black spots for off balance texters, she’s off again, world of her own, white headphones and flashing thumbs. At least she’s sat down though.  Should be able to find all of the worlds great literature by listening to people on a 38 bus, that’s what he says anyway, just look at her with Michael Jackson’s Thriller  and a messaging system, totally lost, emotional responses echoing across her face, all zoned out and full of concentration.

I do wonder about the feminine girl. So soft and emotional, big and blubbery on the outside. She explains herself yet again, what she was exploring, all the gentle  pictures in her head.  But what’s on the inside? What makes her work?

But to focus – what’s my inside story. What’s my game, I guess that’s what I’m asking. It’s what I would ask in the class, given a chance, but we aren’t going to push each other are we? Not like that, not about ourselves. Supposed to be that what we write is nothing like what we think.. write about the great unknown – but that’s not what I do. I explore myself in real life then I write about it. Push my limits, then make a story – not so creative in the literature department, more on the real life side. More of a documentary,  the writing is. Tell it how it was. Of course I can’t tell them that, you aren’t supposed to do that to people in lifts. Not in real life, not like I do.

So now I’m talking about how it actually is, underneath it all, the only true reveal, a real one, a “real reveal” – that kind of works – or is that a bad example? Its  a fine line, good rhythms and bad ones, just like Tango. Sometimes I think I really can’t stand the music, especially the old stuff, then every so often it  absolutely gets you. Blows you away. Fine line.

Problem with Tango is you need someone else. Like life in general, not much point by yourself, a basic problem for yours truly. Not for her I bet though, that tough one, she never says much either. Hard on the outside, even harder on the inside, not that I’d know, not yet, what’s her game though, really? What would she do if someone pushed hard at her. Tough things break, soft things burst into tears. Same end game,  different routes. Prefer the tough ones, on the whole. Definitely. I like a contest, more of a game, more respect

Ruby – she was a strong one – nothing left unknown about her, I had everything again and again, every little adventure all acted out – her and her avatars and the role playing and all that passion and talent. Once you get invited in you just play in the box, staying  within the walls, their walls, their limits – change little things like how hard, how much rope. How much pain in her case. Fun while you learn, then it’s time to move on – onto the next one. Love the power, whereas that’s exactly what she loved to loose, being helpless, a victim, completely exposed, that’s what she got off on. Wouldn’t catch me doing that – giving yourself to someone, no control..nothing at all… Never. Way too dangerous. Made a great short story that did, just changed the name and used the photos and notes, easy, bashed it out in a couple of evenings.

Oh thank god she’s got off, didn’t see her leave, must have been gazing out the window. She’s gone anyway. There’s only so much second hand Michael Jackson a man can take. The image stays though, at least for a while. People do that don’t they – leave an impression, sometimes. Part of her is still standing there,let’s bring her back. I can  hear the tinny music, see her  black skin between her white tee shirt and indigo jeans, all slim and teasing. Watch her move slightly from side to side. Her frown and hints of smiles as she concentrates on the keys. I can even make her sway as we swing around the bus in front – there she goes, elbow into the old dear, all in my head – wonderful – she’s gone and I never said a word to her, but I’ve been enjoying her company ever since.

Strange how busses have changed so much but the important things are exactly the same. Now they have TV screens and recordings that announce the stop for you. But the experience is still there, the swaying, the best seats, the views into the night, looking down on everything. A sense of progress, lost in the reflections, trust in a competent, invisible driver, in someone who knows where we’re going and how to get us there. The 38 to Clacton Pond. Without the 38 I would never have known, now Clacton Pond is forever a part of my life. I hear it at every stop, every week on the way home from class – the 38 to Clacton Pond.. there it is again, always the same, always surprising. Only me now, and the driver of course, so often like that late at night. Just me and my thoughts, and the sounds and rhythms of it all.

So what is my real reveal then?

People get on, people get off, and me and the bus bounce and sway our way through the night towards an oddly named destination, somewhere I don’t want to get to. But I’ve started so I’ll finish, that’s how it is. I’ve got my creative heels on and I’m playing a strange role. Through to the cross, 6,7 and 8 – resolve. Feel her pause, waiting for guidance, waiting to be lead. That’s a beautiful step that cross, she’s a perfectly responsive woman staring at my chest, feeling every move, sensing my weight, using every hint to attract and deny. So full of watchful passion. I’m not used to all the connection, not at all, not used to someone so much better than me, not used to being clumsy.

The bus carries me onwards. It really is just for me now, there’s absolutely no-one else. On we go, away from the past, all those lost opportunities. Where was I through all that, where was the inner voice? Where was the consistency? What am I really about, behind it all.  There’s nothing special about me, lots of people invest too much and get betrayed. I feel odd, it’s almost like I’m crying, looking out at the world, all mixed up with my own reflection.

But its only a game and I can get off whenever I need to, just like everyone else, can’t I? I can just stop. I thought I could be a good lead, it’s a difficult one, I’m certainly used to just pushing them about, taking control, making them do what I want.

Well my turn now, here we are, here it comes, time to get moving. Shake it all off. Step down into the darkness, and watch the warm bus draw off into the night.

Or I could sit here for a bit, dreaming, looking out through my own reflection and imagining .. just for a while.

The monologue exercise for my current course in Creative Writing with Gary at Evolution. Task is just to write a 10 minute monologue.

I broke so many rules with this one – will be interested in feedback. Expect to get panned..