I knocked and after a short wait opened the door slowly to peer into the gloom of the office. For a moment I thought it was empty but as my eyes grew accustomed to the darkness I could see Gill stretched out on the floor under the window.

‘Pull up a pew Mark. How’s everything? Good week?’

I smiled, sat down and eyed the case files on the desk.

Gill stood up, pulled up the blind, straightened her hair and brushed at her trousers. I was already getting used to her lack of conventional behaviour and enjoyed working for her.

‘Grab the file – surprised you haven’t already – Julia Booten – she’s been through the mill a bit.’

‘I want to take you down to meet her this morning so here’s a quick summary. Young single mother, numerous social services interventions, severe depression – catastrophic house fire – she was rescued but her two children died. Two years later convicted of arson. Broadmoor for the last 18 months. Several claims of abuse while there, all of which were not upheld. Clumsy but probably genuine suicide attempt prevented. Stopped talking a few months ago. Moved to us as part of the shut down of Broadmoor. The file is well worth studying, she has some interesting obsessions and delusions – she believes in angels.’

‘Is she talking now?’

‘Not to me Mark. I haven’t got enough time as you know but I wanted to try first. So at this stage I’m looking simply for a way in, a way to get her to open up. I don’t know if it’s possible in any reasonable timeframe, but can you make her your priority this week? I’m back here next Tuesday’

‘Yes of course Gill, whatever you need.’

‘Any concerns, immediate thoughts? I’d like to take you down now?’

My mind was full of questions, the first meeting is so important, I was confused why Gill with her all experience was skipping so many details.

‘Self harm? Danger to others? Is she likely to open up to a man?’

‘On the men side – maybe not, to be honest – that’s what I thought so I wanted to try first. But you’re patient and excellent. And all we have.’ She smiled at me. ‘Bring a book or something? It’s not likely to be that fascinating at first, based on my experience. Just be there, see if she will talk given enough time?’

‘On the risk side, yes you should be careful. I was going to go over this. She hurt some people at Broadmoor, claimed self defense and reading between the lines it might well have been. She has the occasional fit and lashes out. But like most she didn’t deserve the security level she got. Normal stuff, lack of resources, mixed wards.’

I flicked through the first few pages while Gill continued in her confident, business like way.

‘She is a self harm risk, though nothing recently. She did try to kill herself after all, and she has some interesting scars. But actually I don’t think that’s a huge concern – she seems to be quietly fighting her own battles, focused on something, just no idea what. We do have a cam on her of course.’

‘Shall we?’ she stood up, I picked up the file and we strolled down to the ground floor and round to one of the flexible space crisis centre rooms.

‘We put her in here just to try to keep her calm. She’s been short on privacy for a very long time.’

Gill held the door open an inch and reached out to touch me on the arm. She looked at me with that kind of mood breaking quiet intensity she could turn on at will.

‘Don’t expect too much Mark. I’m going to introduce you, just in case it makes a difference. It might, because I am a woman and because we have spent some time together. But actually she has never said anything coherent to me. Then  I will leave, and maybe you could try to stay for a while, just to see if its possible without her lapsing. Small steps.’

‘Hello Julia, there‘s someone I want you to meet. This is Mark.’

She was sitting on the edge of the bed, her pale skin gleaming with sweat. Her arms were crossed over her chest, her hands pulling at the short  nightshirt near her shoulders as if hugging herself. She was slowly rocking.

‘Mark is going to be here with you whenever you want him to be. He’s just going to listen. He wants to help you.’

She didn’t respond, and stared down at her feet, watching them trace small circles on the floor. I could hear soft murmurs, almost whispers.

‘Hello Julia.’ I said, quietly. ’I am just going to sit over here, you don’t need to say anything, and I am not going to come any nearer.’

I sat on the small chair, looked at Gill, who nodded, shrugged and quietly left the room, closing the door behind her. I was alone with Julia for the very first time.

We run the streets

Darkness. A physical silence. The noise of them had passed, the sudden throbbing and pulsating pain of it – all gone. A slow drip from a broken pipe. Dark puddles on the concrete floor. Broken glass everywhere. I lay still where I had fallen then slowly turned my head. Night reflections of the city. Yellow and orange, inky black.

I close my eyes, trying to feel my body. I can taste the blood in my mouth. I see one of them again, dark shadows, fist raised.

It wasn’t personal, it wasn’t me. I just happened to be there. I raised myself up, looking around. I knew they had gone. Swept on by each other, feeling the rush, railing against the world. But I looked anyway. Pale smoke in the dark distance, there was a faint smell of petrol.

I remember parking, going to the store, picking up groceries. I had talked with him, I always do. We have talked most nights for years, I still don’t know his name. I had often though of asking, but it never seemed right.

Did I sense anything? Like those machines that pick up changes in the atmosphere, tornado warnings?

There was the usual tensions, the constant backdrop of bad news. Bad TV – riot pictures. Bad radio – interviews with nervous politicians. Nothing special.

He had seemed uneasy, fidgety. Maybe he felt something.

He looked around, scanning the street.
So did I.
Nothing.

I had paid and crossed the dark and empty road. Behind me I could hear him pull down the heavy metal shutters. The rattle of the chains. I didn’t look back.

I remembered reaching the car, putting my bag down, looking for the key. Hearing them in the distance, my heart jumping. A car alarm. Glass breaking. Seeing them running the street, yelling. Sweeping towards me, like flood waters channeled by the road. Dark clothes, so fast. Swarming. Moulded into a single presence, mindless, uncontrollable, powerful and full of malice. No chance of appeal. There had been nothing, then in a blur they were on me, brutal shocks, blackness and it was over.

Now it feels so calm. The storm has spent itself. No tension.

I stood up, slowly, wiping blood off my hand. Just scratches from the broken glass. Twisted wrist from the fall. Nothing broken. Maybe a tooth. Groceries strewn all over the place. Mindlessly I started to pick them up, put them back in the bags. I felt cold, alone. Helpless. I started to shake.

Notes from the Word Hoard

The way the exercise works is explained here.

I chose ‘Broken glass everywhere’ and the short story turned out to be very close to the image. I first thought of running in the physical sense, and then in terms of ownership. 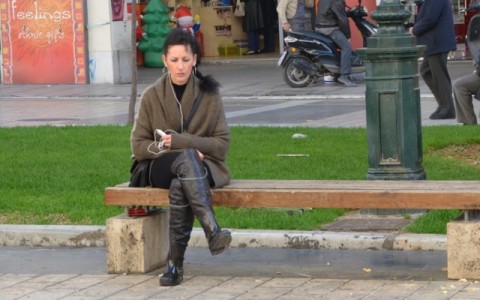 Another great evening last week discussing creative writing with Gary Mepsted. One of the main subjects that comes up consistently is that of leaving space for the reader.

This is extremely important in creative writing – if we provide all the answers and explanations the reader will become bored. Give them the space to work things out for themselves, and leave them with a sense of satisfaction – ideally the emotion would be ‘I didn’t expect that – but yes, I understand”. People are also absolutely prepared to have many minor things left unresolved, a beginner writer like myself is too often tempted to make everything too neat.

In photography I am also learning that without a story that allows the viewer to participate the photo is a meaningless snap. A friend often describes this as ‘context’ – she will ignore a pretty scene of a boat drifting by, because there is no story. She will be facing the other way – finding images and stories amongst the graffiti on the wall.

This is true in business and also in my life.

In business we have been designing and implementing a comprehensive dashboard this month. I have all of the financial information nailed, its just a question of presentation. But one of the metrics needs to be a measure of satisfaction and engagement of our staff. I passed around a simple graph that a friend who runs a search company had found very useful – a simple graph that asks you to plot where you are on two axes – one is how clear your role / tasks are – and the other is how much freedom you have within that role. 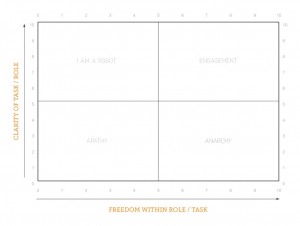 The idea of course is that without the freedom you simply won’t be engaged – people need space to contribute – they want to chose the best way to get things done, participate fully in the way they accomplish the tasks the company needs them to complete. They need space to express themselves.

In life I am learning now to make sure that I respect peoples space – i think I have always had a temptation to try to control too much. A friend I met recently is just a brilliant example of this – she wants to live life to the full – but expects to control nothing, to enjoy the weirdness and excitement with what happens if you pursue your passions and learn from those you meet on the way. 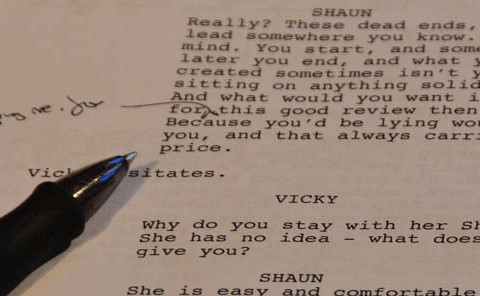 I am currently half way through a creative writing course and as a continuous task, as well as weekly assignments, we are to write a 30 minute screenplay. As I have never thought at all about writing screenplays this is a big ask.

It is proving a really great way to learn about some sides of writing. For me the most fascinating aspects are

Conveniently it transpires that a minute of screenplay is a page – so the target is clear – I need to write 30 pages. Currently I am on page 13, so a bit behind. And in true amateur writers procrastination fashion I have done just about everything today – including blogging about writing – rather than actually write.

When in doubt, make a fool of yourself. There is a microscopically thin line between being brilliantly creative and acting like the most gigantic idiot on earth. So what the hell, leap.