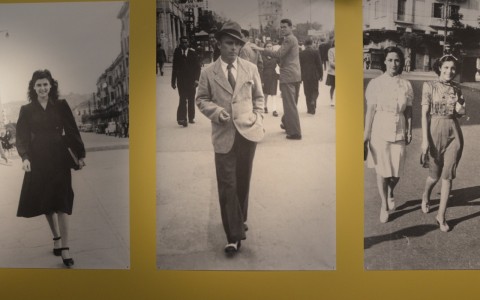 I enoyed the Thessaloniki museum of photography today – and full credit to them for this image that is part of an exhibition that captures the evolution of Thessaloniki over recent generations. It is a small, fascinating showing that provides though provoking images of lfe in the city through various significant events since the invention of photography enabled such documentary images to be captured.

With this image – there are actually 4 large works on the wall – what struck me so much was the confidence of youth, striding out into the sunshine, confident in their appearance, tangibly excited by what life had to offer them.

I spent some time in fromt of these images – asking what these people would say to someone like me, so many decades later. Would they whisper words of encouragement? Carpe Diem?

I wonder. What would my father want to say to me now, if he had the chance to whisper something? I think he would say “go for it – you only get one chance Nigel”.

And I am listening.

One thought on “Striding Out – Full of confidence”